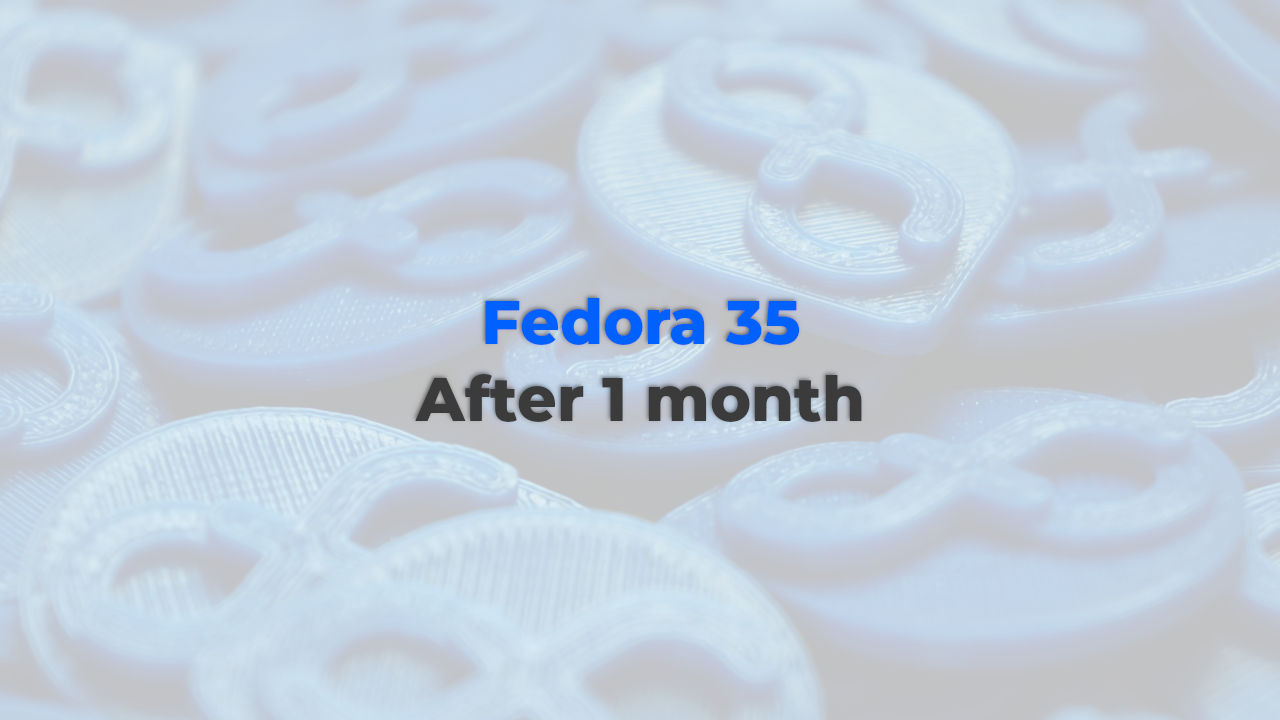 In November, along with the release of Fedora 35, I decided to give it a try. Give it a try, as in using it daily for work and for fun. Now, there’s no secret I’ve been using Ubuntu for a while. So why switch to Fedora?

Well, I’ve tried Fedora in the past (I believe version 27 at the time). But, the reason is quite… lame. I saw the news that Fedora 35 was released, and I use an RHEL distro for all my work. Be it CentOS 7, CentOS 8, CentOS Stream, or Rocky Linux, a form of RHEL is behind 99% of my work. So why not try an RHEL distribution for my desktop?

And there we have it, probably one of the lamest reasons to distro hop ever. How am I trying out Fedora? Full on. It is the only OS installed in my system. No dual boot. And yes, its full name is Fedora Workstation. Whatever.

To be fair, I do have a Windows 10 VM in case of an emergency need for an Adobe product – 99.99% percent of the time I don’t, thanks to my wife, but I don’t want to bother her with every stupid little thing, so I’m passively learning Inkscape and GIMP. Basically, my only reason for still having Windows around.

Note: ok, so maybe having the luxury of needing little to do most of my daily tasks is a luxury that allows me to distro hop like this. And yes, I could have just installed CentOS or Rocky, but I wanted something new. As the kids say it… for the lolz.

TLDR: Fedora is a Linux distribution based on RHEL (Red Hat Enterprise Linux). Fedora is known for focusing on integrating new stuff fast. While that might come with some potential issues, if you’re not new or are willing to learn something new, it is not an issue most of the time.

How this Fedora review works

I’ll try not to blame Fedora for stuff that is not that easy in any Distro – it ain’t that hard either, just a couple of Google searches, but I digress. Like mounting NTFS drives at startup because you are lazy and have been avoiding a good clean-up for a couple of years, even if you aren’t really using Windows anymore.

The installation experience was very smooth – Fedora uses the Anaconda installer. And to be fair, you would barely need to touch the terminal as a normal user, as the Software Center has most of the stuff you need.

No driver issues, no problems. I updated as requested by the OS after the installation was done… and that’s about it.

For my free time, I mostly play Age of Empires II – Definitive Edition, Grim Dawn, and sometimes HoMM 3. I just used Lutris, and they worked. No noticeable performance problems – by that, I mean >60 FPS as I usually play with Vsync on.

I swear GNOME 41.1 is so smooth and nice working. Now, it might be because I use an Nvidia GPU or not. But it’s amazingly cool, and I have not encountered any issue yet. I do use hot corners and active screen edges.

It should come to no surprise that for normal tasks (doomscrolling, email, videos, music, YouTube, notes), most distros will work flawlessly in 2021. And Fedora is no exception.

Obviously, on a modern CPU with 32 GB of RAM and an NVMe SSD, it would be really weird to find any OS as ‘resource hungry’ out of the box. As far as I can tell, Fedora 35 is not resource hungry.

Working on it daily

Fair warning: some days, my work is boring.

The software I usually use:

So on my average day, I might write emails and debug that dumb function all day.

Or I might have a wild day and add something new to a client’s platform or store. Or get deep into a server and make stuff work properly and fast.

All of this while being connected to my development box and my NAS.

You might say that for what I need, any distro will do great. And even Windows will do great (well, not at everything, but you get the point). And I have no counter-argument to that. But so does Fedora, and it looks pretty while doing it on GNOME 41.

I don’t know why, but what surprised me is that when trying to get some photos from my Galaxy S21… it actually worked! Like… it recognized the phone, I easily copied what I needed, and that’s it. Maybe some form of PTSD from older phones and other operating systems.

I’d argue against comparing things like this. Fedora or Ubuntu are not fundamentally better than each other or than another Linux distribution. They are great for their intended users, and some distros are better for beginners, and some are not. And as a beginner who outgrows basic stuff, he might want to try something else. And that’s the beauty of it! We have A LOT of Linux distros. So rejoice!

They are really similar. If you are an inexperienced Linux user, you’d probably be better off with Ubuntu as it has better driver support and… its user base is big – so Google will help you faster.

But in the end, either ar fine. And even Fedora can be perfect for a beginner. Because it ships with a pretty interface, a software manager, and some basic software. You can literally install most distros nowadays and then log in and post to Facebook while watching Netflix. Linux has evolved a lot.

Fedora has come a long way. And Fedora 35 is freaking awesome. I’m obviously not going to distro hop during the holidays and actually get some work done. So I’ll probably stick around with Fedora for a while.

All in all, I love seeing how various distributions have evolved over the years. We are in an age where some distro like Fedora might be sufficient for your average Joe that uses his computer and phone to sit on social media and consume media content.

For most hardware configurations (laptops and Desktop PCs), everything just works. Gone are the days where you needed to meddle with why the audio does not work after installing a Linux distro or something like this. And that is amazing because you don’t have to pay $110. It’s free!

I hope you found this article useful or it was an interesting read. Till next time!