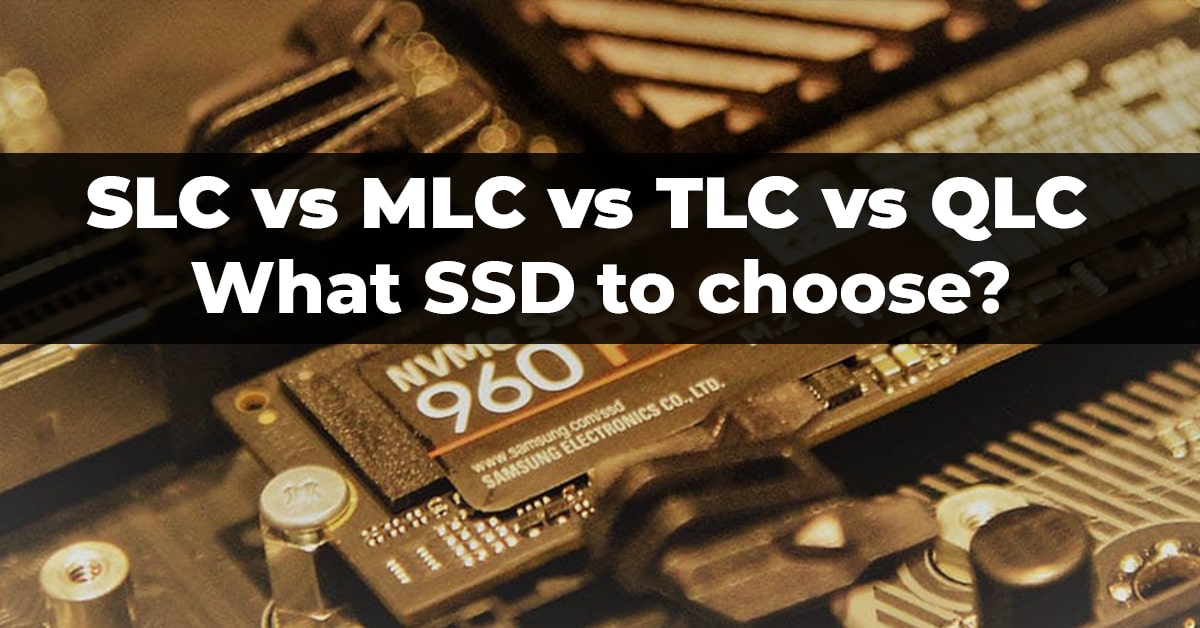 If you’ve been shopping for an SSD drive lately, you probably saw terms like SLC, MLC, TLC, and QLC thrown around by the manufacturers. What do all these mean?

These acronyms refer to the type of flash NAND chips present in that SSD. Each chip has it’s advantages and low points. We’re going to talk about these in this article. By the way, I also made a video about this over on my YouTube channel.

But first, the short anatomy of an SSD drive

Besides the fancy case, stickers and connectors an SSD has 3 major components:

So what is NAND flash memory?

It’s a newer type of data storage, and faster than the good old HDD. It’s also a lot more efficient.

A NAND flash chip is made up of several cells, that hold bits in them. These bits are turned on or off through an electrical impulse. The ordering of the cells inside the NAND flash chip represents the way data is stored on the SSD. The number of bits in each cell gives out the name of the NAND flash chip. For example, SLC comes from Single Level Cell and it means that each cell holds 1 bit.

So we then have:

Why is this? By storing more bits in each cell, the NAND chip can hold more data. This allows us to have bigger SSD’s. But remember! There are drawbacks!

Let’s explore each type of NAND chip. Don’t forget to pick an SSD by taking note of what you’ll be using the PC you’re installing it to. Don’t senselessly burn the budget, but don’t be too cheap when it’s no the case!

note: you’ll see me talk about the lifetime of an SSD. I’m referring to the number of complete writes a chip supports. Please take note of the value specified by your SSD manufacturer. And if you are performing a lot of writes, look for a high TBW – total bytes written. If it’s for a NAS that you will never delete anything off of it… don’t burn cash too much.

How afraid should I be when it comes to TBW – total bytes written?

Not that afraid. Let’s say your 1TB SSD has a 300 TB TBW rating. So it can be completely rewritten 300 times. On my work PC (~10-12h/day usage except Sundays), that I rarely shutdown, after ~1 year, I have written 21 TB on it. That means it should probably last 14 years. Heck, even if it’s 10 years, that’s A LOT if you are mildly into tech. Why? Do you really think this SSD will please you in 2025? You’ll probably want newer and bigger tech. So I’d just choose a reputable brand with a decent TBW rating and solid performance.

This is the most precise type of NAND memory when it comes to reading/writing data. It also has the biggest lifetime.

SLC chips can take up to 100.000 complete rewrites. That means it can be written up to 100.000 of its capacity. Take note that SLC’s are usually meant for enterprise stuff, as they are the most expensive type out there.

MLC stores 2 bits per cell. This leads to a lower production cost, bigger capacity and of course, lower SSD prices when comparing to SLC ones.

I’d choose an MLC SSD as the main drive if you are really hungry for performance and need peace of mind for your data, even if in most normal usage scenarios it won’t be so different from a TLC SSD.

TLC brings even lower costs, but at the price of performance and durability.

A cell in a TLC NAND flash chip can take about 3000 to 5000 rewrites. It’s still a lot but these drives are not meant for enterprise usage, as they are consumer-grade chips.

I’d choose a TLC SSD as an OS drive if you are on the budget side, but I think it’s great for storing stuff. Games, data, movies, etc. I usually go with TLC for NAS setups that do not see deletions too much. Or as a secondary drive on a gaming/work PC.

The cheapest. But still, QLC and especially 3D NAND QLC are still much faster than the old HDD.

Be sure to pick a 3D NAND drive if you are going for a QLC one. 3D NAND solved a lot of reliability issues with these drives.

Even if they have the lowest life (about 1000 writes) it’s still a lot for the average user. For the guy/gal that sits on Facebook, has some homework to do or that fancy Powerpoint project… it’s just perfect.

I’d use a QLC drive when budget is an issue. Or if you really need high capacity storage but you have no cash. Or… you just don’t use the PC that much in heavy and intensive tasks.

So what would I pick?

Keeping in mind not to go insane over the whole write cycles thing, I’d pick something that fits my budget, from someone reputable – like Samsung, Corsair, Western Digital, Seagate or even Kingston.

In my mind, the ideal setup would look like this:

That is if you want the best you can get for your work machine, as a developer/programmer/sysadmin/3D work/etc. Work needs to be done.

For gaming and general usage, I’d just get two TLC 2 TB drives and be done with it. Most of them are really good, don’t be fooled by marketing.

What do I mean by don’t be fooled by marketing? It’s all about need vs want. If you are constantly debugging something in several local-hosted virtual machines, you’re going to want every extra speed that an MLC can give you. Do you need it? Probably not, you’ll save a couple of seconds here and there in certain scenarios vs a TLC. But hey, if you’re bringing the big cash you want to get shit done fast.

If you’re hoping for the fastest level loading time in that great game… don’t bother. Just get a TLC. And put that extra cash into a GPU/CPU, an extra 0.3s shaved off that loading screen will not impress you.

Oh, and here’s my video on this subject:

Did you see my article about Web Hosting?