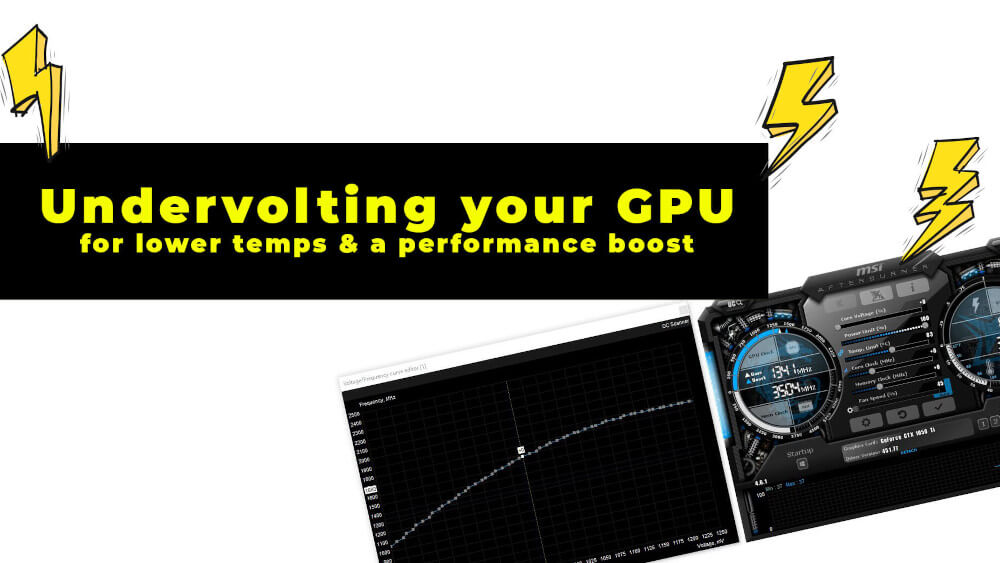 A refresher: undervolting refers to reducing the operating voltage of your GPU, preferably while maintaining the same level of performance.

Today you’ll find out how to undervolt your GPU for free, using the free utility, MSI Afterburner.

This guide works on Nvidia GPU’s that are Pascal or newer. So basically 1000 series and newer. It also works on some AMD GPU’s but I urge you to try Wattman if you’re running an AMD card as that utility works best for AMD GPU’s.

What we’ll achieve using this guide: lower GPU core temperatures without sacrificing performance and then we’ll take it a step further and actually increase the performance by about 8% while staying under the original temperatures.

This really is a long article, I feel you! But if you don’t want to miss anything, please take the time to read everything so you can achieve a stable undervolt.

Do note that I’ll be using a GTX 1050 Ti, so your mileage might vary. As this card is not that power hungry, the results will not be so spectacular. But a beefier card like a 1070 or 2070 will probably see much better results after undervolting.

Why undervolt my GPU? Who is this guide for?

If you’re running a small form factor PC or have set up a HTPC this might help you, because when crammed into tight spaces, GPU’s tend to overheat.

This guide might be helpful if you’re just looking to lower your GPU’s overall temperature and power consumption too! Read on.

How will undervolting provide better performance?

The problem is that this process is done gradually, and not at a certain temperature. That means that a card that reaches 80 degrees Celsius in a game, will perform slightly worse than if it were to reach a maximum on 70 degrees Celsius.

So basically, when talking about newer Nvidia GPU’s, the cooler, the better.

Every software listed below is free. So in order to perform a stable undervolt on your Nvidia GPU you will need the following programs:

And that’s about it! Neat! Let’s get started.

What we’ll be monitoring using HWiNFO

We have to keep an eye on several things in HWiNFO in order to see if what we’re doing actually works and how well does it work. (we’ll start HWiNFO in sensor mode)

We use HWiNFO as it shows us the information in four useful columns: current, minimum values, maximum values, and average values.

How we’ll keep notes of things

Using your favorite spreadsheet software (Google Sheets or Excel probably) keep a tight note on the things I mentioned earlier in HWiNFO.

The workflow / process of undervolting

I’ll outline the steps needed in order to ensure a good undervolt for your Nvidia GPU, or how I do it:

I’ve followed this workflow on many GPU’s and every time the result was beautiful: lower temperatures, at the same or better performance. Win!

GPU Undervolt – the actual how to

Made it this far? Great! We’ll actually get to undervolt now!

Determine the target frequency of your GPU core

As I said, GPU boost will boost our card even past the advertised Boost Clock you see mentioned in GPU-Z or on your GPU’s box/manufacturer page.

So the first step is to start up HWiNFO and run a game or benchmark for just a couple of minutes. We just need to see how much your GPU will boost. Check the Maximum column of the GPU Clock. You’ll most likely see a figure higher than the Boost Clock mentioned in GPU-Z.

We’ll need this number in order to make sure we’re not decreasing the core clock of the GPU whilst undervolting.

As you can see, after just starting Unigine Heaven, my GTX 1050 Ti boosted itself much more than the advertised Boost clock:

Now, the GTX 1050 Ti is definitely not a beast. It will probably sustain those clocks for a while without any major temperature issues. But a more powerful card might actually decrease them over time as it heats up. That’s what we’re trying to avoid.

MSI Afterburner is a power tool, but it can seem unintuitive at first. No fear!

After opening Afterburner, press CTRL+F to bring up the voltage frequency curve. Let’s say we want to set the GPU voltage to a maximum of 950mV (as opposed to 1.050V in my case, if you check the screenshot above from HWiNFO).

So we just click on the square that is in front of 950 mV. But wait!

Afterburner shows us what frequency our GPU will be at, at that voltage. So it’s 1683 MHz. Way lower than my target of 1809 MHz as I’ve previously determined.

To solve this, we just need to go back to the main window of Afterburner, and increase the core clock until the number from 950 mV is as per our requirements. In my case, I need it to be 1809 MHz.

As you can see in the above image, I’ve increased the Core Clock until it matches my required frequency. And then just click apply. If the frequencies shift a little, re-adjust and apply again.

So now that we have our max boost frequency desired at 950 mV set, we need to do the following to ensure our GPU will NOT go over 950 mV and that stable frequency:

And here’s a bunch of images of me doing the above 5 steps:

After hitting the last apply in the above steps, you’ve just undervolted your GPU. Congrats!

Now you need to benchmark and note the temperatures and other data as stated above.

And I cannot stress this enough: test! benchmark! game! Make sure your settings are stable.

After you’ve done at least 3 benchmarks in one program, 3 in another and have played a game for at least 1 hour in my opinion. This is to make sure your video card is stable. And before you ask, yes! You can actually make some 3D Mark Time Spy runs successfully without errors but actually fail or BSOD in another benchmark or game. It’s just how these things work. You need to make sure to stress the card in different types of workloads, to make sure it’s stable.

note: if you want to overclock while undervolting, you just need to adjust the Core clock higher. That’s basically it. And then increase the memory voltage too. Again, do it in small increments to make sure you’re not going overboard.

So these are my results:

As you can see I’ve shaved a couple of degrees. And then I went ahead and overclocked and got a ~8% boost in all of my 6 runs of these two benchmarks. So I basically got the GTX 1050 Ti to run about 2 degrees cooler while performing 8% better. For free!

Si just by carefully monitoring with HWiNFO and using Afterburner we’ve went ahead and decreased the temperatures of a puny tiny GTX 1050 Ti with an average of 2-3 degrees. And then got an 8% performance boost!

I encourage you to try out undervolting your GPU and even try overclocking it a bit. You might be surprised of the results! And if you’re not into overclocking, you probably will appreciate a more efficient GPU.

Thanks for reading this far!

Don’t forget to share this article if you found it useful! Thank you!