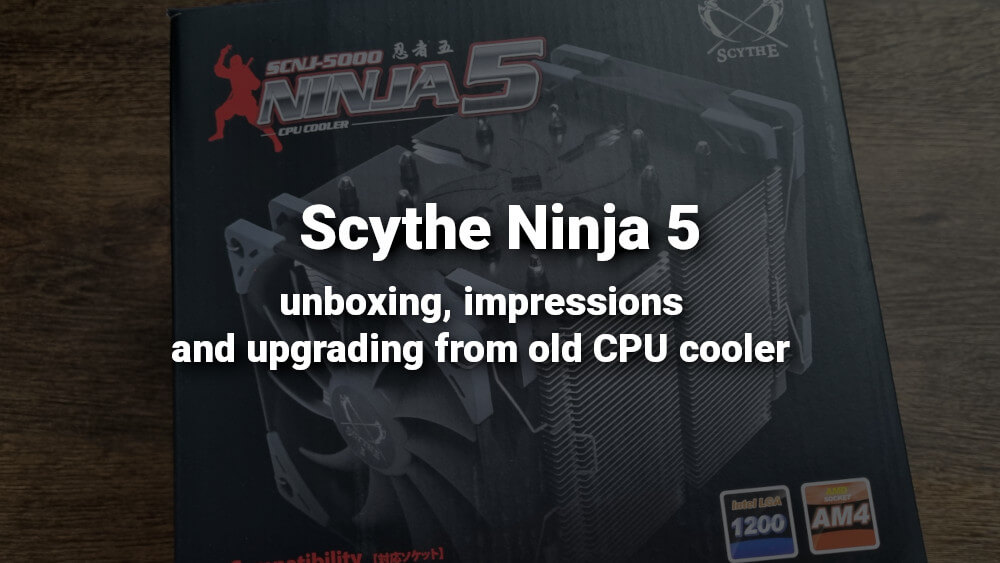 So I had to buy a new CPU cooler, and I went with the Scythe Ninja 5. Don’t get ahead of yourself! This is not a detailed review, but a quick unboxing and some feedback from a guy that switched from the Deepcool Gammaxx GTE V2 RGB to this Scythe cooler.

This might be a great read if you have a cheap tower cooler with 3 or 4 heat pipes and are looking to get something a little better.

Why the Scythe Ninja 5?

To be blunt: a great price was available, and I was looking for a new CPU cooler for my Ryzen 3600x. And I really didn’t want to throw too much $$ at this as I am looking at some new HDD drives for the NAS in the near future.

The long story is that on one of my home lab machines, I managed the fantastic performance of breaking a leg from the mounting mechanism of the stock Intel cooler. The respective system has an i3-4360, and while temperatures were decent, I was feeling a bit guilty for breaking that thing.

So I wanted to install the Deepcool Gammaxx GTE V2 RGB in the i3 box and get something else for the 3600x.

In the gallery below, you’ll find some pictures from the ‘process’ of unboxing the CPU cooler. I must say, great packaging, and that included screwdriver sure is handy!

You’ll obviously find these everywhere, but here’s the short story so you won’t have to go somewhere else:

Again, I love the fact that they included that screwdriver. It was a must-use. The packaging is solid, and everything is nice and properly ordered. I do not consider the packaging to be ‘wastefull’, I feel like it was just the amound needed of plastic and stuff.

The package contains anything you need to mount the CPU cooler on any socket that it is compatible with, including some thermal paste.

This is a big heatsink

It really does weigh >1kg, and it really is big. Be careful and make sure you don’t have tall RAM if all your slots are filled. I’m using an ATX B450 AORUS PRO and a kit of 32 GB Corsair Vengeance RAM, so there were no problems.

But is it big enough to be used as a passive cooler? – That means running it without fans. To be honest, I don’t think so. Or maybe it would be okay if you’re running something with a TDP <60W. The fins are not really made for passive cooling, as far as I can tell.

I did do some small tests before installing the Ninja 5 and after. Just to see if it is better – I was almost sure it must be at least as good as the Deepcool one. I really had no problems with the old one, to be fair.

Some important things to mention:

Note: the ambient temperature was about 25.6 degrees Celsius. So pretty hot usually I like something closer to 22.

I am pretty impressed with this CPU cooler. Especially as I got it at about 52$ because of a promotion. I realize it’s running two f-ing Noctua industrial fans and probably the best thermal compound in the world.

But mind you, I have my own fan curve set in the BIOS so they don’t really get loud* until 68 degrees Celsius, a figure that is just my personal preference. (my goal is (and was even with the Deepcool) to keep it under 75 degrees in the rare case I am doing something heavy for more than a couple of minutes on this system apart from staring at something in VScode)

*loud is, of course, something subjective. What I find acceptable you might throw out the window

So was the upgrade worth it? Well, yeah. I mean, it did get better temps, and I am fairly certain even with its stock fans, things would be better than the old Deepcool I had. Probably not such a big difference, but still better.

What about actual performance? I did not notice anything special. I think sometimes PBO works better now – as it boosts a bit higher in frequency and for longer? Not sure as I do fiddle more often than needed around those BIOS settings.

In Cinebench, I didn’t see anything significant… I mean, 1-3% might be just luck. But on average, the score was higher with the Ninja 5 on the multi-core test.

In the Civ 6 benchmark, average turn time was about half a second lower – did the test only once before/after, so this might be irrelevant.

The Scythe Ninja 5 is definitely a good CPU cooler for its money. Great packaging, great product quality (no dents, scratches, or anything missing), and it gives you everything you need right out the box.

I’d recommend it to someone who’s upgrading from a stock CPU cooler, especially if your CPU has a TDP of 120W or lower, for great results (I don’t see a recommended TDP for the Ninja 5, but it must be able to handle quite a load as it is a big boy with two kind of too silent fans). Or even if upgrading from a cheaper aftermarket CPU cooler.

I hope this sort of unboxing and sort of review / comparison was useful to you. Maybe you’re in the same boat as me and looking for something better than a very cheap CPU cooler but nothing to break the bank.