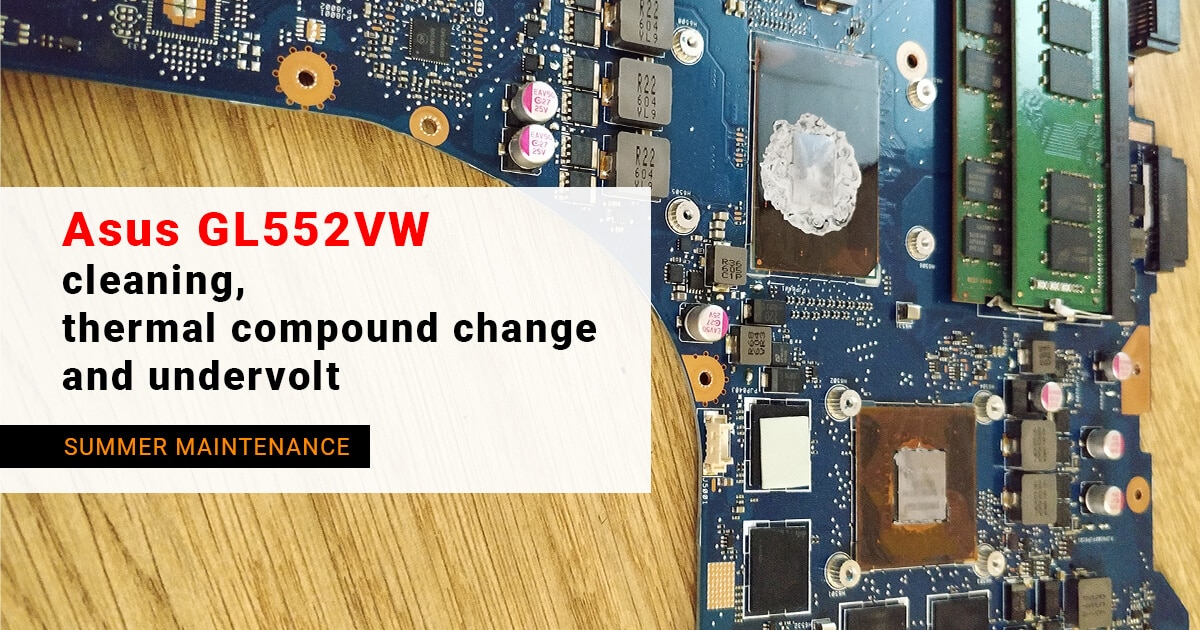 So I have an Asus GL552VW notebook, that has been retired from daily use and it’s a home server machine now. As summer came, ambient temperatures rise especially since the room it’s sitting in has no AC.

So we have a constant ambient temperature of 27 to 28 degrees in that room and the notebook was pushing over 90 degrees Celsius in load. Mind you, it’s rare when this notebook actually sees full load since it’s basically a web development server machine – it has virtually no traffic and has Magento, WordPress and custom stuff that I’m fiddling with on it.

Having this in mind, it is probably overpowered for what it’s meant to do, as it holds an Intel Core I7-6700HQ, a Nvidia GTX 960 and 16 GB of RAM. But given the fact that it was already here, why bother buying something for such experiments?

Nonetheless, a good cleaning was in order! As it was never opened before, I decided to take it apart and properly clean the dust, change the thermal compound and after all is done and said, under-volt the CPU a bit.

How I cleaned the Asus GL552VW

The notebook actually seems quite fragile to be honest, when feeling the plastics inside and everything. But I guess that’s another discussion for another day.

After about two hours, I was done!

And here are the results:

You can see the before, after and the final after where I applied the undervolt too. (I’ve talked about undervolting a desktop Ryzen CPU here)

I’m pretty pleased with the results, as the CPU never went above 85 degrees Celsius after a solid 30 minutes of torture. It’s still a lot, but given the ambient temperatures and the fact that it is a laptop, what can I say… it’s ok.

And while Idle or just me browsing around on a WordPress test installation, it was just barely hitting 48 degrees Celsius. Not great, but a lot better than 55 degrees!

Should you do it?

Why not? Especially if you have some good thermal compound laying around.

Just be careful while taking the laptop apart so you don’t break anything. If I had to give this a difficulty mark I’d give it a 6/10. And most of the pain comes from removing the keyboard on this stupid model – on the GL552VW you have to pry-open with something around the whole keyboard. It’s a stupid system in my opinion. The rest are just screws and patience.

Did you see my article regarding thermal throttling?